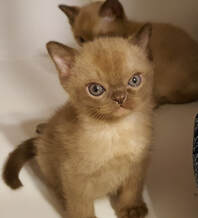 The Burmese is a very outgoing cat who loves to be around people. When they are not climbing to the highest spot in the room, they can be found snuggling in any lap (even strangers). They love to play and have even been known to learn how to fetch a favorite toy. Burmese thrive on attention and will follow you around when you are home. They do not enjoy being left alone for long periods and it is recommended, by most breeders, that you adopt them in pairs. Their voice can be described as raspy, rumbling and soft, however they are typically only vocal when they want your attention (or food).
There are four colors of the American Burmese. The original, which is a rich brown, is called sable; a warm honey-beige called champagne; a medium grey called blue; and a pale dove-grey called platinum.  The Burmese eyes are always gold regardless of the cat's color.
In recent years some new colors of Burmese have been introduced. These colors include red, cream, and tortie varieties. In most of the world these are still considered Burmese but in CFA they are grouped under a different breed called European Burmese. These cats have the same wonderful personality of the original four colors. (used with permission from the Evita Burmese website)
© 2014-21 Hart2Hart. All Rights Reserved.